As you know, L1 regularization refers to the L1-Norm of parameter values, which could generate sparsity. To construe sparsity, suppose each sample in a given training set contains tens of thousands dimensions(some dimensions can be a combination of others) to model an intricate interaction relationship in real world. After finishing training the model, you will get a high-dimensional weight vector corresponding to relative data dimension. You tell yourself this weight vector is good(not overfitting) and will perform well in future prediction work. But actually you know little about the weight values and may feel it like a black box. Unlike other regularizations, L1 regularization strategy will do model selection automaticly and will always return a sparse weight vector. This kind of sparsity make sense, because some input dimensions have no influence with the output value. If original dimensions of input data have some real meanings, it leads to interpretability and it is a rather attractive property of L1 regularization.

Another challenge in solving L1 regularized optimization problem is that traditional defined gradients of objective functions do not exist, that’s the reason L2 regularization is much more widely used. As far as we know, there are two ideas for solving L1 regularized optimization problems. Firstly, some algorithms transform original problem into another form, and in new space the problem becomes derivable. The other class of algorithms define a generalized form of function derivative(with special property) then solve the original problem directly. These tricks are being actively researched in the near decade since 2000 but in this article we will only discuss an algorithm following the former idea.

Because derivative of loss functions in Eq(1) is hard to calculate, we try to transform original problem. We will start by giving some intuitions. Firstly, there is a trick for representing a real number by the Lemma given below:

In last section, we find a transformed constraint optimization problem, and if we solve Eq(3), we can easily construct the solution of Eq(1). In this section, we will present an simple algorithm called stochastic coordinate descent to solve Eq(3). 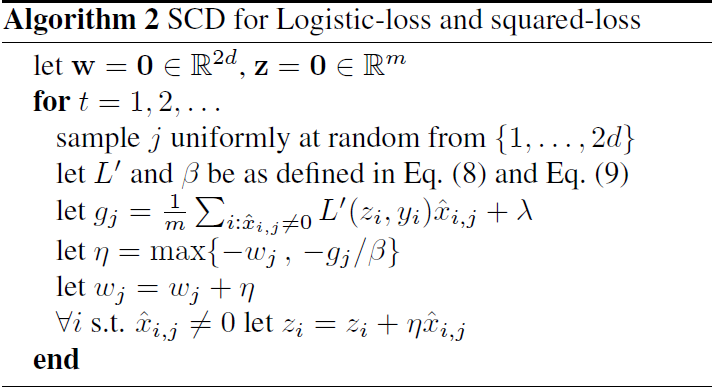 The stochastic coordinate descent algorithm showed above is similar to the stochastic gradient descent algorithm. In stead of choosing a training sample, SCD randomly chooses a dimension and updates that dimension parameter using derivative information. You can read the reference of Shalev-Shwartz S, Tewari A. Stochastic methods for l 1-regularized loss minimization[J]. The Journal of Machine Learning Research, 2011, 12: 1865-1892 to see more details such as convergent speed and so on.

Implement the SCD algorithm for solving Eq(3) is very straightforword. The note you need to pay attention to is that you may firstly transform d-dimensional input data to 2d-dimension, but actually you don’t need to store the 2d-dimensional vector at all. After training, you also need to convert the 2d-dimensional vector into d-dimensional parameter vector of the original problem. We wrote a sequential SCD version of lasso and L1-regularized logistic regression inside paracel framework, you can run the code following the documents here.

In this article, we introduce the L1 regularized optimization problem and discuss two basic ideas for solving that problems. Following the first kind, we transform original problem to a constraint optimization problem and use an simple stochasitic algorithm called SCD to train the model. We also showed you two sequential implementations of lasso and l1 regularized logistic regression solvers. Hope you can enjoy this blog.